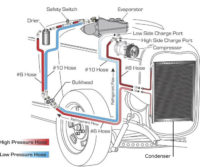 Essentially, air conditioning works by reducing moisture in the air. All refrigeration works upon this same principle whether it is cooling for a vehicle, a home or a refrigerator. When you turn on the A/C in your vehicle or in your home it uses energy; whether fuel in your car or electricity in your home to remove moisture from the air, thereby reducing the temperature.

The primary functions that occur during air conditioning are;

Hard tubing and flexible hoses connect all the actual components of the air conditioning system in your car. Evaporation and condensation, expansion and compression all working together are the physics of why it works.

How the A/C System Works in Your Vehicle

The fluid that passes through the entire A/C system is the refrigerant. The refrigerant can evaporate at a low temperature, and then condense again at a higher pressure.  All cars built after 1996 use a non-CFC fluid called R-134A or R-134 which is deemed environmentally friendly. Because the working fluid gets both very hot and very cold, it is important to keep moisture out of the system, as ice forming in the compressor can damage it.

The compressor is the work horse of the air conditioning system, powered by a drive belt connected to the crankshaft of the engine. When the air conditioning system is turned on, the compressor pumps refrigerant vapor under high pressure to the condenser. The compressor then draws in the low-pressure refrigerant vapor to start another refrigeration cycle. The refrigeration cycle then runs continuously, and is regulated by the setting of the expansion valve.

The compressor takes low pressure, gaseous, r-134a and compresses it which generates heat. Then send that heat to the condenser, where the heat is dissipated to the outside. After the condenser, liquid refrigerant travels to the evaporator, located inside the passenger compartment, where it is allowed to expand, removing heat and cooling the evaporator. The fan directs air over the evaporator, then out the air vents into the car.

The condenser and evaporator are, essentially, two radiators connected in a loop.  The condenser is a device used to change the high-pressure refrigerant vapor into a liquid. It is mounted in front of the engine’s radiator, and it looks very similar to a radiator. The vapor is condensed to a liquid because of the high pressure that is driving it in, and this generates a great deal of heat. The heat is then in turn removed from the condenser by air flowing through the condenser on the outside.

The now liquid refrigerant moves to the receiver-dryer. This is a small reservoir vessel for the liquid refrigerant, and removes any moisture that may have leaked into the refrigerant. Moisture in the system causes havoc, with ice crystals causing blockages and mechanical damage.

The pressurized refrigerant flows from the receiver-drier to the expansion valve. The valve removes pressure from the liquid refrigerant so that it can expand and become refrigerant vapor in the evaporator.

The air conditioning system is originally built to maintain tight seals on all tubing.  If any of the tubing or seals crack or break then air, moisture and dirt can infiltrate the A/C system. This can cause the lines to freeze. This will block refrigerant flow from being able to cool your car. You can tell this has happened to your car if when you turn the A/C on sometimes warm air comes out of the vents alternating intermittently with cool air, then back to warm and so on.

When topping off the R-134a fluid moisture can enter in if extreme care isn’t taken. This is one major reason to have you’re A/C fluid refilled by a professional instead of doing it yourself.

An accident often causes a leak in a valve or tube which allows moisture and dirt into the A/C system.

The History of Air Conditioning

We can thank Willis Carrier for his fascination of the dew point that led to his inventing what led to today’s air conditioning.  The invention of air conditioning changed the world as it was. Suddenly people could work or go out to see a movie during scorching summer heat. Previously, the mid-day siesta was the only way to get through a hot and sticky day in relative comfort. When air conditioning systems were installed productivity increased and public services such as restaurants and shopping malls could enjoy customers all day long instead of for only the morning and afternoons.

The invention of air conditioning has impacted many industries including cars and computers.  Computers must be kept cool. Without a proper cooling system they would not be able to run. Cars would be miserable to drive in without air conditioning.  We can also thank Willis for ice cream.  Without his invention we wouldn’t be able to go to a grocery store and pick out a delicious selection of the creamy desert, let alone milk and other dairy products.

Willis’s father, Duane Carrier was a music teacher, grocery store owner, postmaster and farmer. His mother, Elizabeth, had been raised a Quaker. She was the first in her family to marry outside of her clan.

Elizabeth took primary care of Willis. He tagged along side of her during his younger years being her “helper”. He would watch and participate whenever there was a machine to fix such as the sewing machine or clock. Elizabeth would figure out how to fix something herself before resorting to getting help from her husband or repair shop. Elizabeth gave Willis liberty to play with assembling parts and fixing things right along-side of her.

Willis attended a one room school which was common in those days for his primary education. At the age of nine he was struggling with fractions and recalls a favorite memory of his mother.

She had him bring her a pan of sliced apples, cut in halves, quarters and eights to demonstrate how to calculate fractions, “She opened up a new world to me and gave me a pattern for solving problems that I have followed ever since.” “In one-half hour she educated me. Fractions took a new meaning and I was very proud. No problems would be hard for me after that. I would simply break them into something simple and then would be easy to solve.” His mother continued to help him with his homework when needed and encouraged him to become an engineer.

Willis worked hard at both helping the family farm and homework. He would often be up very late doing his homework after coming home from school and helping his Dad farm until it got dark.

At the age of 11 his mother died. Willis said of her that she was his mentor, idol and inspiration. Instead of being overwhelmed with grief he vowed to make her proud and was known for attributing his talents in Mathematics and Mechanics to his mother.

By middle school Willis had become a tutor for other students. He attended Central High School in Buffalo, New York where he was offered a state scholarship to Cornell University upon graduation to study Mechanical Engineering.

In addition to his studious vigor, Willis was a tall 6 foot, 6 inches and participated in just about every sport available at the University. Although he had received a scholarship there was still his living expenses that needed to be covered. In order to pay for those he found all sorts of jobs such as milk delivery, lawn mowing and boarding house help. He gathered some of his friends and organized one of the first laundry services.

He followed a mantra his mother had ingrained in him, “Figure out things for yourself.”

This entrepreneurial hard working tall young man attracted the affection of Edith Seymour, a Cornwell student. The two fell in love and married one year after Willis graduated in 1901.

At that time he was offered his first official engineering job at the Buffalo Forge Company in Buffalo, New York. The company specialized in heating, drying and forced draft systems. Willis thought that the current systems were very inefficient. He drew up a thesis paper called the “Mechanical Draft” whereby the company took note and extended support and time for him to test his theories in search for better solutions.

A consulting engineer that was working to solve the problem brought Willis in to help. Their initial experiments failed. Willis then tried an experiment that used cold water that flowed through heated coils. He logged all of the results to equations, tables and graphs. He was able to chart the flow rate, temperature of cold water and flow rate through the coil that was needed to cool and dehumidify the air.

The engineer in charge of the project was very impressed and wrote a raving review of the results, “The cooling coils which we sold this company have given excellent results during the past summer.” Willis’s chart clearly explained the flow rate of chilled water in relation to the coil. From the conclusion of this coil experiment and results Willis coined the term “Air Conditioning”.

Two years later Willis applied for a patent for his invention. He called it the “Apparatus for Treating Air”. The patent was granted and issued on January 2, 1906. In 1911 Willis published the “Rational Psychrometric Formulae” that became a popular tool for engineers. In 1913 he invented the humidifier.

Willis and the Carrier Corporation charged on and in 1926 introduced the first home air conditioning unit. The company continued to launch a plethora of varying types of air conditioning solutions such as small units for retailers that needed a large refrigerator unit in their shops, ventilation solutions as well as humidity and climate control products. At the age of 73 Willis’s company was awarded the contract to install air conditioning for four of the largest skyscrapers in the world using the Weathermaster system. This was the last large business milestone that Willis accomplished in a life filled with invention, problem solving and continually being a change agent to industry, business and everyday living.

Today, as we settle into our home, work places and vehicles, we can thank this hard working, inventive engineer for bringing us comfort despite the heat and cold that presses in against us.

If your vehicle air conditioning isn’t working at maximum capacity schedule an appointment. We make sure your fluids are at the proper levels and we provide a full A/C diagnostic check to make sure there are no leaks or worn out parts that may wreck havoc if left unchecked.